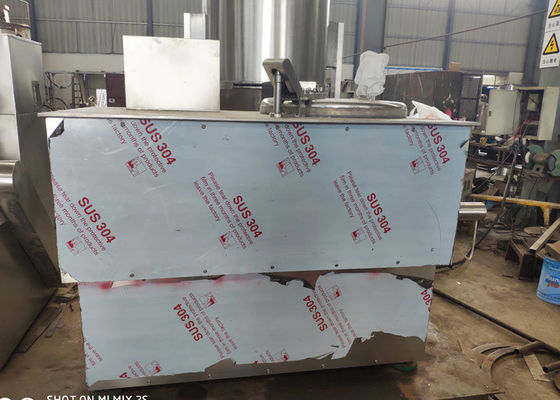 In the wet granulation equipment, the horizontal high speed mixing granulator is mainly used. The principle of granulation of the horizontal high-speed mixing granulator is that the two processes of mixing and granulation are completed in the same container, and the bottom-rotation stirring is used, and the stirring slurry is installed on the bottom of the pot, and a gap is formed with the bottom of the pot. Stirring the foliar surface ensures that the material collides and disperses into a semi-flowing tumbling state and achieves adequate mixing. As the adhesive is injected, the powder is gradually wetted and the shape of the material changes. The rotary motion of the chopping knife and the stirring slurry on the horizontal axis of the pot wall generates eddy currents, so that the materials are fully mixed, turned and collided. At this time, the chopping knife in the area where the material is turned over can fully break up the dough material. Particles. At the same time, the material is squeezed, collided, rubbed, sheared and kneaded between the particles in three-dimensional motion, so that the particles are more uniform and fine in friction, and finally form stable spherical particles to form a wet and uniform soft material. Among them, the size of the granules is limited by the characteristics of the material, the rotation speed of the knives and the granulation time.